Posted on November 6, 2011 by Makeni Webmaster

On the 14th of October we celebrated Makeni Centre’s 40th anniversary, which was timed to coincide with graduation day for the latest crop of graduates in agriculture, electronics and food production.

Our guest of honour was Mama Chibesa Kankasa, who was amongst the freedom fighters before Zambia’s independence and later served in President Kaunda’s government, and was minister for women’s affairs from 1969 to 1988.

Mama Kankasa also supported the work of Makeni Ecumenical Centre, or as it was then, the Lusaka Nutrition Group, from its earliest days in the late 1960s. 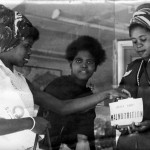 Makeni Centre was officially opened in 1972 by president Kenneth Kaunda for the unveiling of a commemorative plaque, but work on the site began in 1970, so we have (somewhat arbitrarily) selected 2011 as our 40th anniversary.

The day began with a tour of the centre, dancing, and displays from  various departments in the Commonwealth Hall. The primary school children entertained us with descriptions and short sketches of what they wanted to do when they grow up.

35 graduates and many friends and families and invited guests joined us on a hot day to enjoy a number of speeches, dances by the Anansi Nkondo dancing troupe, music from the St Andrews Boys Brigade brass band accompanied by a marching troupe, and a drama group.

You can see some video here of the graduates entering the arena. MEC40thAnniversary1 (You might need to use windows media player to see this. I hope to do some better video soon.)

Father Mukuyamba, Anton Dil, Joseph Mumba and Mama Kankasa were interviewed live by Phoenix radio. Afterwards there were meals and refreshments.  Everyone seems to have enjoyed the day very much!

I spent most of my youth in Makeni, growing up at the centre as it emerged from the bush, one building at a time. I now work in the UK as a lecturer in computer science.
View all posts by Makeni Webmaster →
This entry was posted in Departments, General news and tagged supporters. Bookmark the permalink.