You never know what kind of rains a year will bring – some years you can’t get enough, others you get too much. This is one of those years when the rain has just continued to fall in great quantities.

Once again, I hear, Makeni is being flooded. The drainage ditches along the roads have been poorly maintained.  Of course, much of Lusaka along Kafue Road used to be a place where ducks and deer were in abundance, and floods are nothing new to the city.

The general clinic, the ARV clinic, and the toilets for both the school and the clinics were flooded impassably
for two days, which finally seems to have prompted the council to clear the ditch in front of MEC. 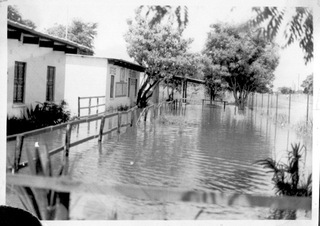 They put a large earth mover to work on the entrance to the centre. Unfortunately, in the process, they also
removed the tarmac road at that point and the part of the road that went over the ditch. Cars could not get in or out for a full day, until Fr Mukuyamba
and other staff exhibited that can-do attitude that is born of necessity, and built a new makeshift bridge over the ditch. It did get some water flowing though. 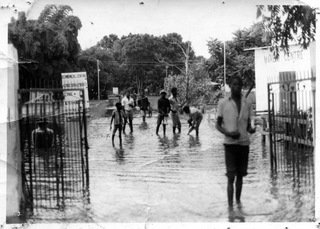 The ‘dambo’ as we call it – the acre or so we have always kept undeveloped –
has flooded properly and is full of ducks and other unidentified
visitors.

Apparently some children from the orphanage even took
to the lake in a water storage drum for a while.

I have no current photos, but here are some from the floods in 1978, which give you a good idea of the scene on the ground. 1989 were the next big rains, and there was widespread flooding in Zambia (and all the way down the Zambezi) in 2000.

Here also is an aerial photo from the same period showing the kind of flooding that is affecting the whole area once again. 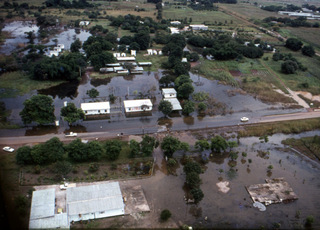 I spent most of my youth in Makeni, growing up at the centre as it emerged from the bush, one building at a time. I now work in the UK as a lecturer in computer science.
View all posts by Makeni Webmaster →
This entry was posted in General news, The way we were.... and tagged history, Lusaka, rains. Bookmark the permalink.