Venus Mwanza has kindly given us permission to reproduce his painting of Makeni Road, outside the grounds of MEC. This painting was published by BBC Focus on Africa Magazine in 2003, winning Venus (former student and current employee of MEC) a nice prize, as well as local recognition and a number of commissions! 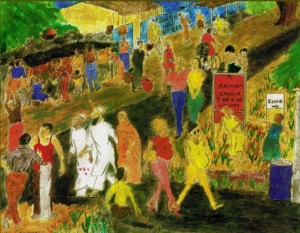 It feels like MEC has been a magnet for activity over the years. Then again, Makeni is just not the rural area it used to be. Now we have a few local shops, a market (which probably was due to MEC’s location), occasional bus services. There is also a Catholic church and mosque nearby.

Notice the signs pointing to the Anglican Church and clinic inside the grounds!

Venus reflects on the cultural and religious diversity of the community represented on our road and concludes: “somehow everyone manages to respect one another.”

I spent most of my youth in Makeni, growing up at the centre as it emerged from the bush, one building at a time. I now work in the UK as a lecturer in computer science.
View all posts by Makeni Webmaster →
This entry was posted in General news, The way we were.... and tagged church, staff, students. Bookmark the permalink.